Kem Jati Diri is BACK AGAIN

As-Salam to all malaysian.Here's some promo and school holiday advertisement. 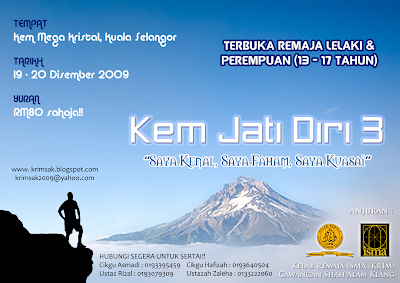 Kem Jati Diri is back with more adventure and excitement.Since it's establishment in 2007,this camp has been a life changing for its participants.Kem Jati Diri 3 is bringing you to a life changing experience and having a better world view in in getting through in our daily lifes .Activities conducted also will be challenging the participant's mind and physical ability in our effort to build young strong muslims in achieving a perfect muslim,mentally and also physically.


So guys and girls,what are you waiting for?Grab this challenge while places are available because first comes first you know.

To get the better and clearer picture of the programme,just clickfive the pamplet above.

KEM JATI DIRI is proudly brought to you by Kelab Remaja ISMA,a youth club under ISMA(Malaysian Muslim Solidarity)
for further details,please visit our website at

I, RHUHEL AHMED (British Passport No. 105601983) of full age and a citizen of United Kingdom do hereby solemnly and sincerely declare as follows:

2. I live in Sandwell, England.

3. The purpose of making this declaration is to put on record my torture in Afghanistan and Guantanamo Bay.

4. In October 2001 I and 3 of my friends Shafiq, Asif and Monir – all citizens of the United Kingdom went to Pakistan for Asif’s wedding and a holiday. We were there early about 3 weeks before the wedding and toured part of Pakistan and later we decided to go tour Afghanistan. We went with an aid organisation from Pakistan that was taking food and medical aid to the poor in Afghanistan.

5. We were in Kandahar when the bombing commenced by the United States of America. We stayed for 2 days and tried to get back to Pakistan. We were told that the border was sealed. The aid organisation members proposed that we follow them to Kabul where it was safer. We travelled by road to Kabul. We stayed here for 2 weeks.

6. We tried to get back to Kandahar to go back to Pakistan. We paid for the members of the aid organisation and ourselves to go back in a mini bus. We realised that the mini bus we had hired was taking a different route. We ended up Kunduz in Northern Afghanistan. We stopped at a Taliban base. Unknown to us the members of the aid organisation were actually Taliban sympathisers and they stayed at the base. We were taken to a medium sized hut to stay. We were there for 2 weeks. We were supplied by food and were free to move around the town.

7. During this period the Taliban had lost control of Afghanistan. The Taliban negotiated with the Uzbek warlord General Dostum for a a safe passage to Kandahar. On our way out of Kunduz there was a heavy attack launched by American helicopter gunships that pounded the area. I lost my friend Monir during this attack.

8. A Taliban convoy came and picked us up on our way to General Dostum. When we reached there we were all detained. Our belongings including those of the Talibans were taken away.

9. We were marched on foot in the desert without food and water for 2 days. And then we were put on trucks and taken to Mazar-E-Sharif. During this journey I saw United States soldiers close by on jeeps and sand buggies.

10. In Mazar-E-Sharif we saw photographers and saw containers made of metal and some by canvas. We were put in these containers. There were more then 200 people placed in each container. I was in a container covered by canvas and tore part of the canvas to allow some air in. Those in the metal container suffocated and many died. General Dostum’s forces then shot the bottom sides of the containers on the basis to allow air into the containers for the people to breathe. But this resulted in killing and wounding people. My friend Asif was injured by a bullet.

11. We were then driven to Shabarghm prison which took almost a day. There were hundreds of trucks there. Ditches were dug and those in the containers who were dead due to suffocation including those who were wounded were all thrown into the ditches and bulldozers covered the ditch with sand. Many who were alive but unconscious or wounded were buried alive. My friend Asif managed to survive.

12. In the prison we were beaten first before being put in cells. I and my other friend Shafiq looked out for Asif. And later Asif was put in to our cell. His gun shot wound was only treated with iodine and bandaged. Each cell was about 5 meters by 5 meters with about 40 people. For one week we were just given very little bread and some water. A week later the International Red Cross came and gave us some additional food, water and blankets.

13. We were never questioned by anyone. I could see American soldiers around the prison.

14. On 31 December 2001 prison guards came and asked for English speaking prisoners. I volunteered. My feet and hands were tied and taken to see some American soldiers. They stripped me and checked for bullet wounds and injuries. I told them my story and that I was a British citizen. I was told that I was under American custody and would be treated better.

15. I was then hooded and taken to a room and punched. Then I was put we on a truck and taken to an airport. In the plane we were made to lie down and we were beaten and kicked by the American soldiers.

16. We were taken to Kandahar and we were tied and a rope was tied to our arms and led around with hoods on our heads. We were told to sleep and within a few seconds we were told to start walking. A soldier pushed me down and another sat on me and cut up my clothes. They took swabs of my saliva, a strand of my beard, finger printed and photographed.

17. We were in a hangar. We were given wrist bands with numbers. My number was 102. The next day I was taken for interrogation. I was hooded , feet were chained together and hands handcuffed. I was interrogated and told they will inform the British authorities. I was given a blue jump suit. The days were very hot and the nights very cold. There were no blankets provided in the cold night.

18. The soldiers would do head counts once or twice during the day. During the night it was done every half hour or so which I believe was to prevent us from sleeping. I was in Kandahar for 6 weeks and interrogated on and off during this period by the US military intelligence and the FBI (they wore caps and jackets with the words ‘FBI’). These interrogations were done at gun point and I would get punched and kicked.

19. My hands would be handcuffed at my back and my arms would be pulled till my shoulders felt they were going to come out of their sockets. My legs would be chained and I would be asked to put my legs apart and then while holding my arms the would kick down on the chain which caused a great amount of pain with resulting in cuts and bruises.

20. The soldiers would randomly conduct searches of our cells and whenever they found a Quran they would throw it down on the floor and step on it.

21. I and the other detainees had lice. One day we had a shave and lice treatment. We were then put on a military plane. A chain was placed across my body on the seat. Goggles were placed on my eyes to prevent me from seeing. My hands had mittens and were then duct taped. We were given some food that was placed on our hands but we could not eat because our hands were tied.

22. When I went to the toilet a female soldier followed me to the toilet and pulled my pants down and wiped me after that. It was extremely humiliating and embarrassing for me to be out in that position.

23. We landed some hours later at destination that was very hot and we changed planes.

24. Many hours later we landed again. We were placed on a truck and kicked and punched. We were then put on a ferry and asked to sit in a particular manner. I was kicked many times on my left thigh when ever my seating position changed. It was extremely painful and my leg swelled badly.

25. We reached camp X Ray and stripped and checked us. After that we were put in a cell that was 2.5 by 3 meters. Given a blanket and insulation mat to sleep on. The floor was cement and the walls and roof was made of some softer material. Much later I knew that we were in Guantanamo Bay.

26. The next day I was interrogated and questioned about my personal background and family details. The day after I was interrogated by British intelligence on my background. I asked that I be released but were told they could not do anything about it as I was in American custody. While being taken to and returning from these interrogations I would be kicked and punched by the American soldiers.

27. The Americans showed me photographs taken from a video that they called the ‘Turnip Farms’ which was taken in Afghanistan showing Osama bin Laden giving a speech. The Americans alleged that I was in the video along with my friends I denied these allegations.

28. In 2003 the interrogations got worse. My hands and feet would be cuffed together and it would be an extremely difficult position for long periods. Played loud music with strobe lights for hours to force a confession out of you.

29. These intense interrogations continued for about 5 months from the middle of 2003. And I was put in solitary confinement during this period.

30. Sometime during the end of this period of 5 months the British intelligence confirmed that their records showed that I was in the United Kingdom during the time the alleged video mentioned above was filmed. They also said that unless I was using a false passport to travel at the said time.

31. After this the intense interrogations ceased and I was taken out of solitary confinement.

32. The regular interrogations continued and so did the abuse of punching and kicking.

34. The whole experience has affected my family and my life in a very severe way. I lost 2 ½ years of my life for something that I did not do. I feel that the government of the United States of America and which ever government(s) that were involved should be brought to justice to bring closure for all the victims of these grave injustice that has been perpetrated on innocent civilians.

And I make this solemn declaration conscientiously believing the same to be true and by virtue of the provisions of the Statutory Declaration Act 1960.

Subscribed and solemnly declared by the above named RHUHEL AHMED on ___ October 2009 at _________.
Posted by danialarief 1 comment: