Recently,we went to Sabah for a short visit.A discovery that i have never experience before.First,i thought Sabahan are just the same as the people in the Peninsular but i could say that they are slightly different though.Secondly,here's a rough fact about Sabah:t is located on the northern portion of the island of Borneo. It is the second largest state in the country,In spite of its status as a Malaysian state, Sabah remains a disputed territory; the Philippines has a dormant claim over much of the eastern part of the territory.It is also called the as the 'Negeri
Bawah Bayu' which means "Sabah, the land below the wind as Sabah is protected from volcanic eruption,earthquake and typhoon.
First Day in Sabah,after our arrival at the Terminal 2 of the K.Kinabalu International Airport,we checked in straight into the hotel after a 2 hours journey from KLIA through Air Asia.As we know,my family is not like the backpacker traveller,so staying in Tune Hotels could be imaginable.1 hour of rest,we headed ourselves to the Mari-Mari Cultural Village.As we arrived,we've be
en given a short brief about the rules and regulation when we in the village.At first,i thought the village lived by the origin people,with scary briefing plus with the odd ceremony performed by the villagers when we entered the village.There we have some houses represent each ethnic such Kadazan-Dusun,Murut,Bajau,Rungus and others i can't recall.At the end of the tour,i just realised that all the villagers is just a fake.I was deceived.
Second day,i could say this is the most exciting part.Snorkelling around the Manukan and Sapi Island.The water was so blue,crystal clear.The fishes was,wow..todak,bawal?hehe.i dont exactly know names of fishes,i just know how to eat them.After a shor snorkelling,we took a boat to the middle of the sea and we tried a few water games:- 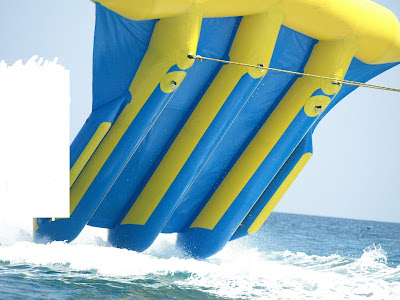 To be Continued..
Posted by danialarief